SIMULATING MULTIPLIER EFFECTS BETWEEN LAND USE AND MOVEMENT PATTERNS

In this paper, we introduce simulation framework for examining the effect of street network configuration on the evolution of the relationship between movement and land use allocation over time. The causal chain introduced in Space Syntax literature suggests that the potential generated by spatial configuration of a street network influences how people move and that these movement flows attract specific types of land uses. These land uses generate in turn additional movement creating an endless cycle of mutual interactions. In Space Syntax, this interaction between movement flow and land use is assumed to work in a positive feedback loop, multiplying the initial potentials given by a street network configuration. The practical consequence of this hypothetical assumption for the Space Syntax method is that the outcome of the feedback loop can be predicted as multiplication of the initial state and therefore doesn’t have to be simulated.
In this paper, we introduce a computational method for testing the multiplier effect hypothesis and identify the cases in which it holds true and those ones in which more detailed investigation considering feedback loops might be necessary. We demonstrate how such investigation based on the simulation of the interactions between movement and land use in time can be operationalized and conduct series of studies exploring the spatio-temporal effects of street network configuration.
We conclude that these exemplary studies show how the presented simulation model can be used to test the core assumption behind the Space Syntax method. We also offer preliminary insides about when and under which conditions it can be reliably applied and when system dynamic simulation might be necessary to predict not only the immediate, but also the long-term effects of street network configurations on centrality, movement and land use distribution.

We explore the evolution of the configurational effects of urban form on the movement and land use allocation over time.

In this section, we compiled a short review of the main ideas discussed in the paper. The purpose is to get a general idea that can be deepened by reading the full paper attached below.

1. Background | What do we already know? 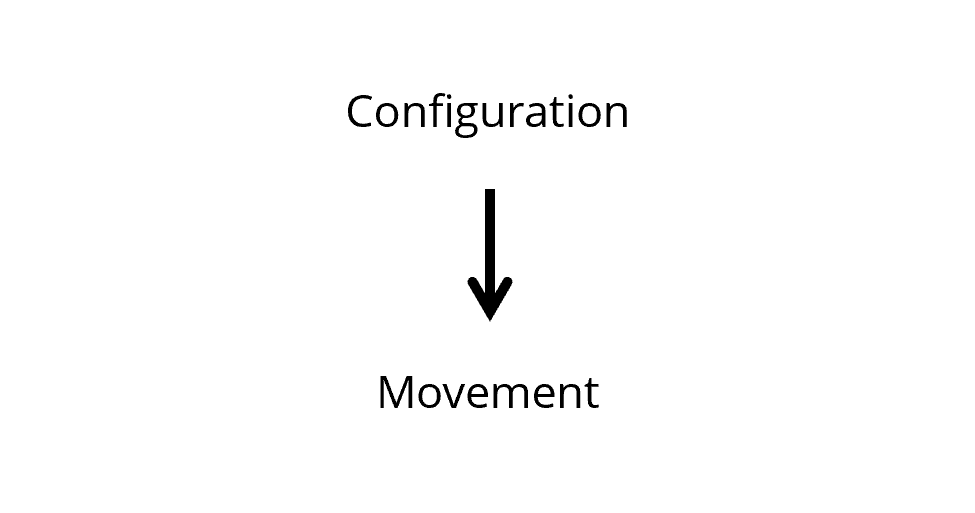 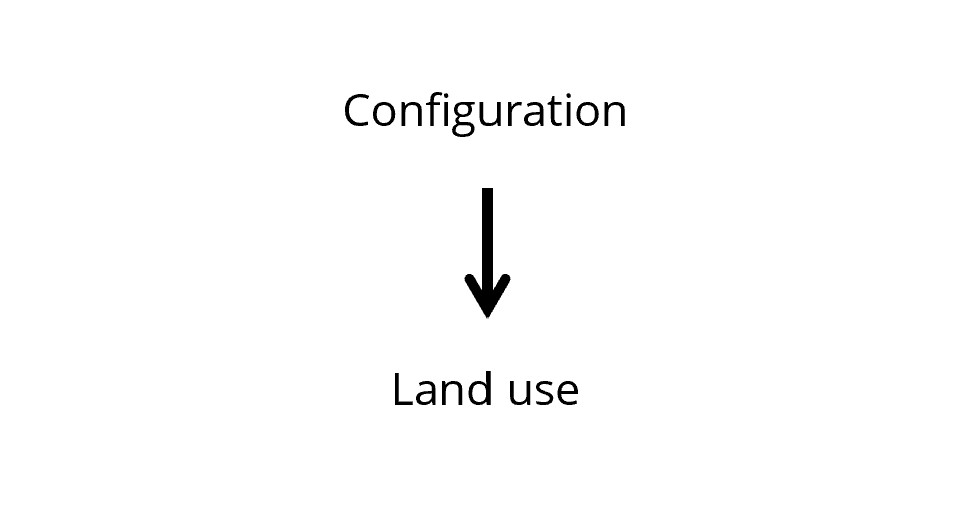 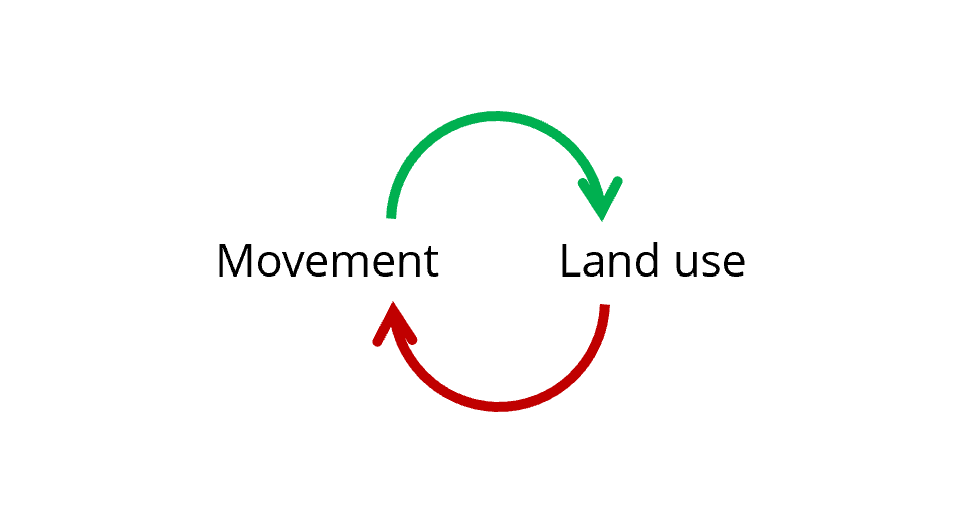 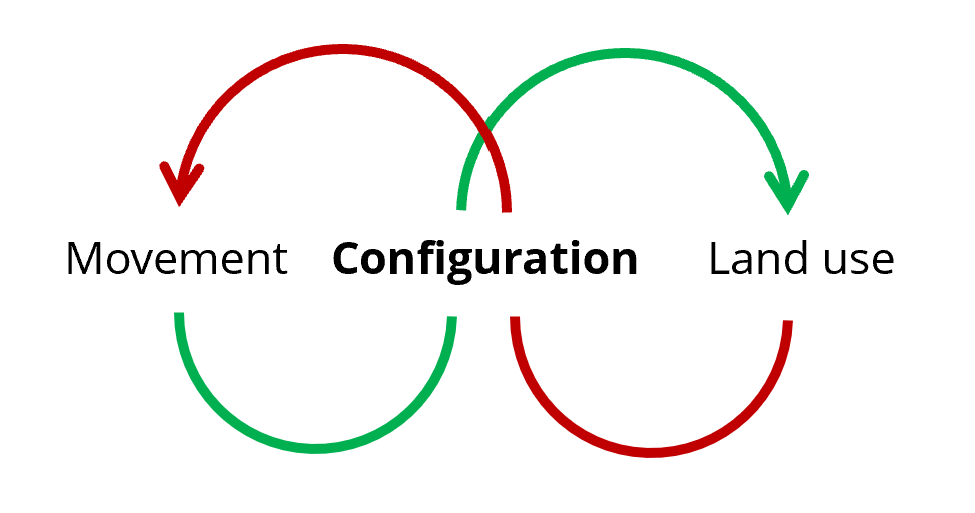 “Space Syntax is about bringing the configuration, movement and allocation of activities together”

“Does the effect of street network configuration on movement and land use allocation evolve over time?”

“The effect of configuration on movement and land use is stable over time, it DOES NOT EVOLVE“

A) = SIMPLE TO PREDICT

B) = HARD TO PREDICT

3. Research question | What do we want to know?

Under which conditions is the result of the feedback loop between movement and land use distribution predictable as a function of the multiplier effect?

Under which conditions does the natural movement potential of the network configuration correct the effect of unequal distribution of land uses (disruptions) throughout the feedback cycle?

“Space Syntax method is based on the assumption that option A holds true. In other words, it is assumed that the outcome of the interaction between land use and movement can be predicted without simulation.”

This assumption is based on: 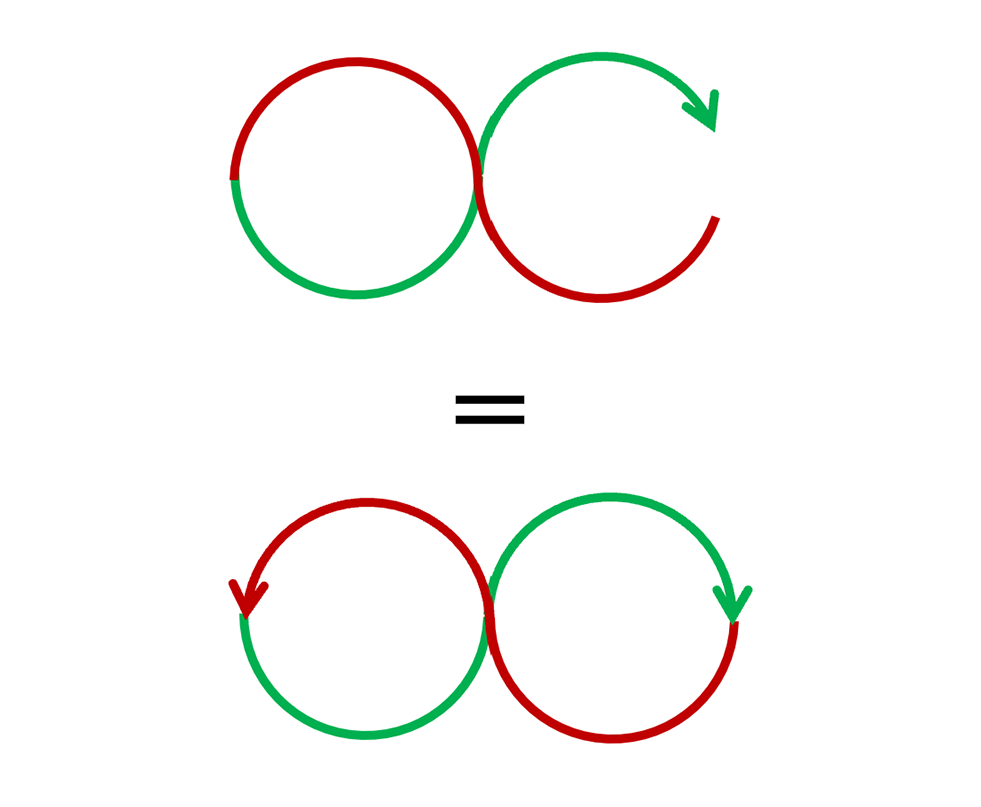 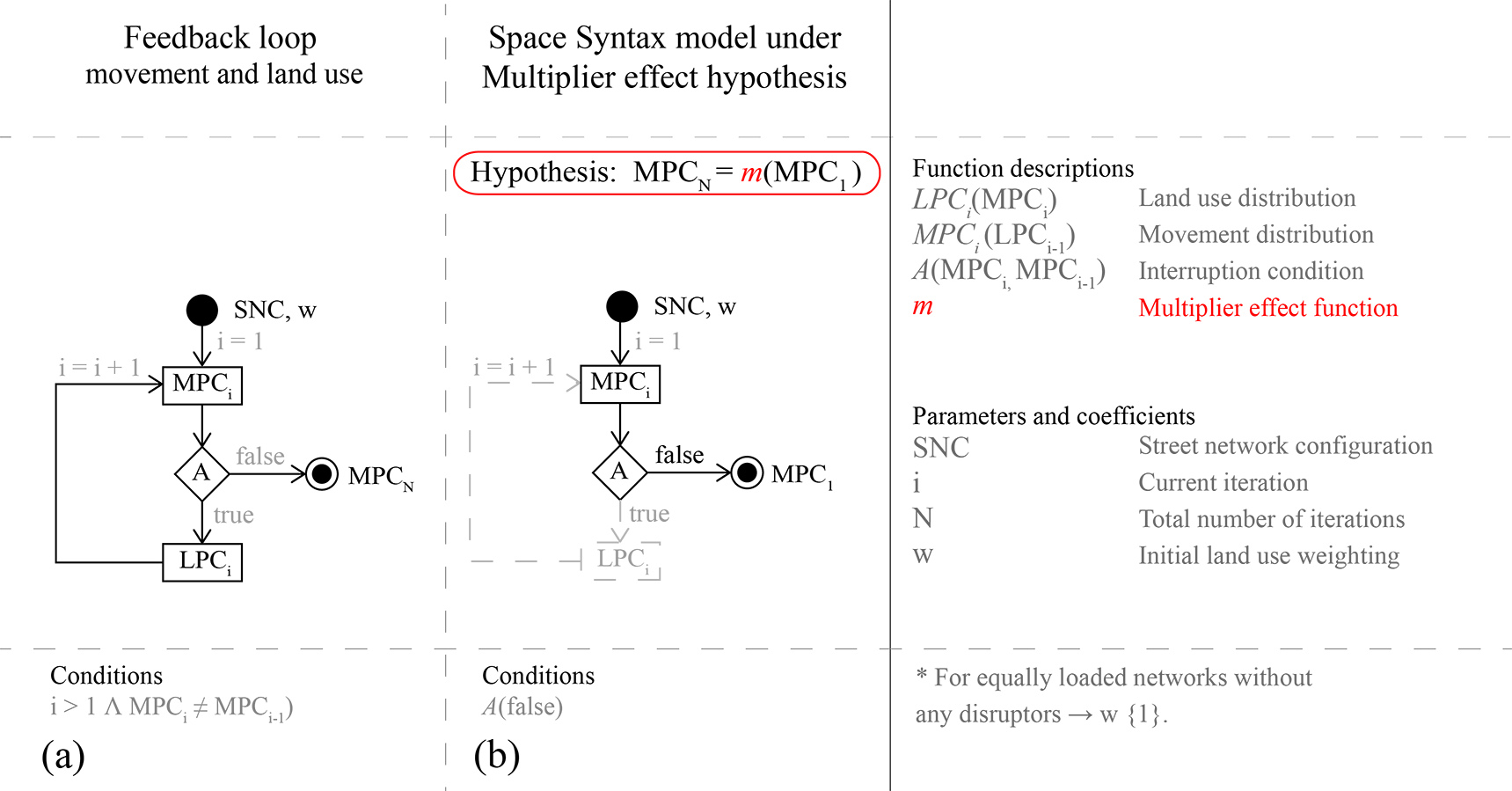 Left ) UML diagram of the Space Syntax underlying urban dynamics model. a) current model of the feedback loop between movement and land use. b) displays the “multiplier effect” hypothesis.

We exemplary explore the impact of different conditions on the multiplier and natural movement effect. The conditions explored in this study relates to how we model the effect of land use on movement and what is the initial distribution of land use in the simulation.

For the following experiments, we used the street network of the inner city of Weimar as an exemplary case study area. Weimar is a medieval, mid-size German city with approximately 60.000 inhabitants. The size, historical development and the overall variety of street network patterns makes it a good candidate for testing the proposed simulation model. On the one hand, the size of the city makes it possible to quickly calculate many iterations of the simulation, but on the other hand it is large and diverse enough to let non-trivial configurational patterns emerge.

*Disrupted network in context of this paper means that in the initial stage of the simulation, not all street are loaded with equal amount of land use. In other words some streets produce more movement than others, which is represented by higher weighting of selected graph vertices.

Equally loaded network in context of this paper means that in the initial stage of the simulation, all street are loaded with equal amount of land use. In other words all streets produce same amount of movement, which is represented by equal weighting of all graph vertices. 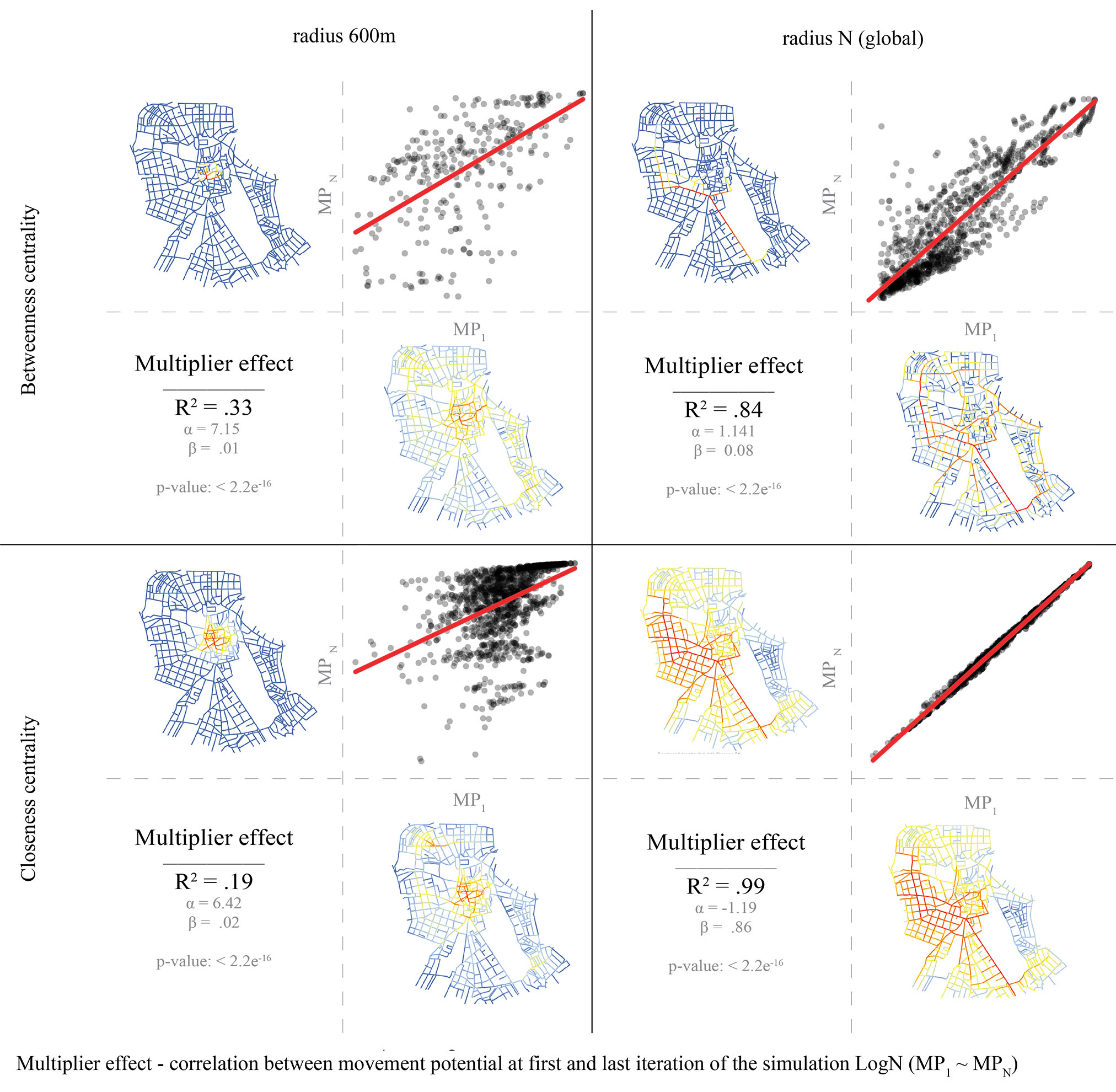 Disrupted network in context of this paper means that in the initial stage of the simulation, not all street are loaded with equal amount of land use. In other words some streets produce more movement than others, which is represented by higher weighting of selected graph vertices. 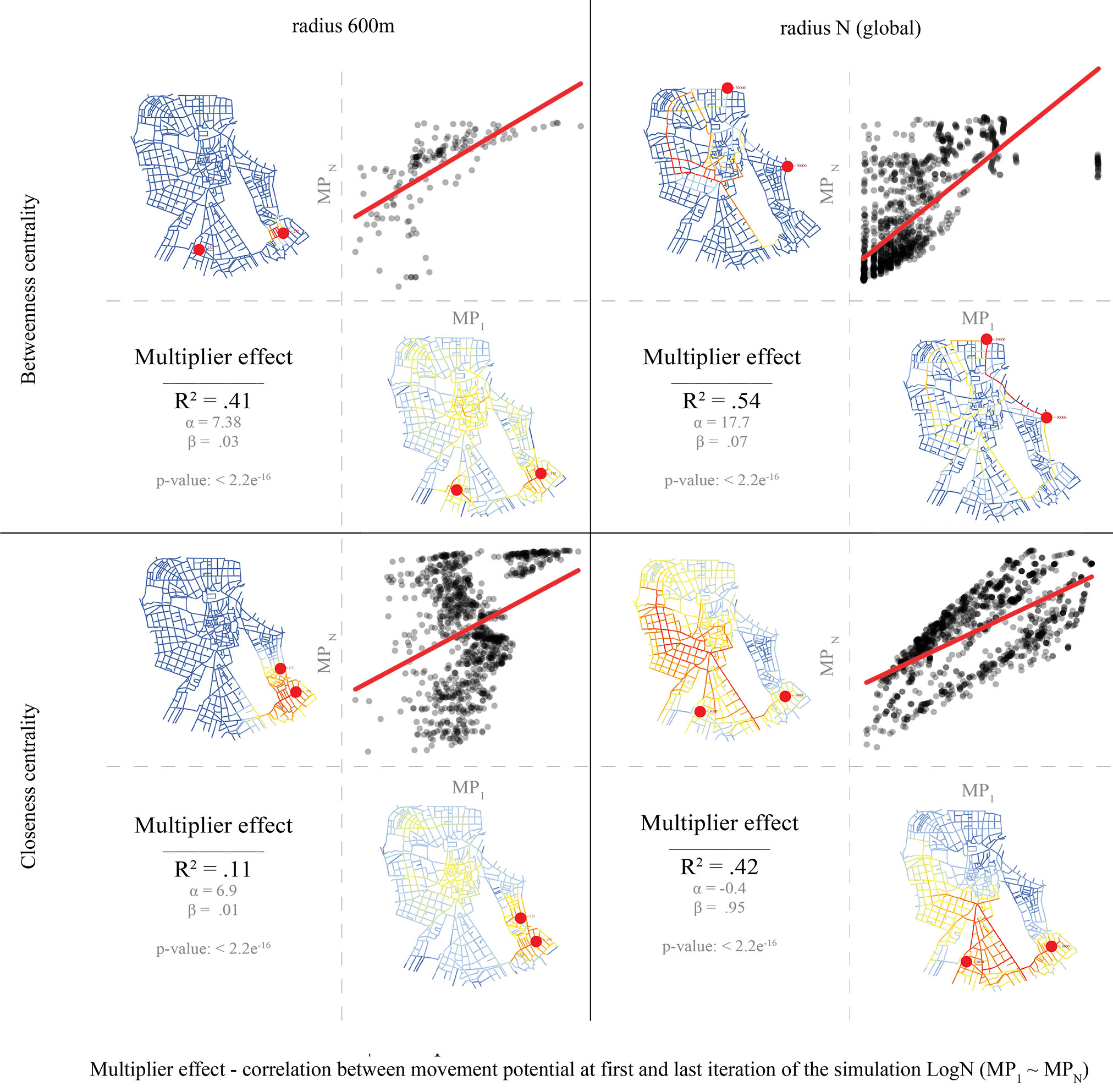 Quantifying the natural movement effect by measuring linear relationship between the movement pattern at the first iteration of equally loaded network and last iteration of the disrupted network. 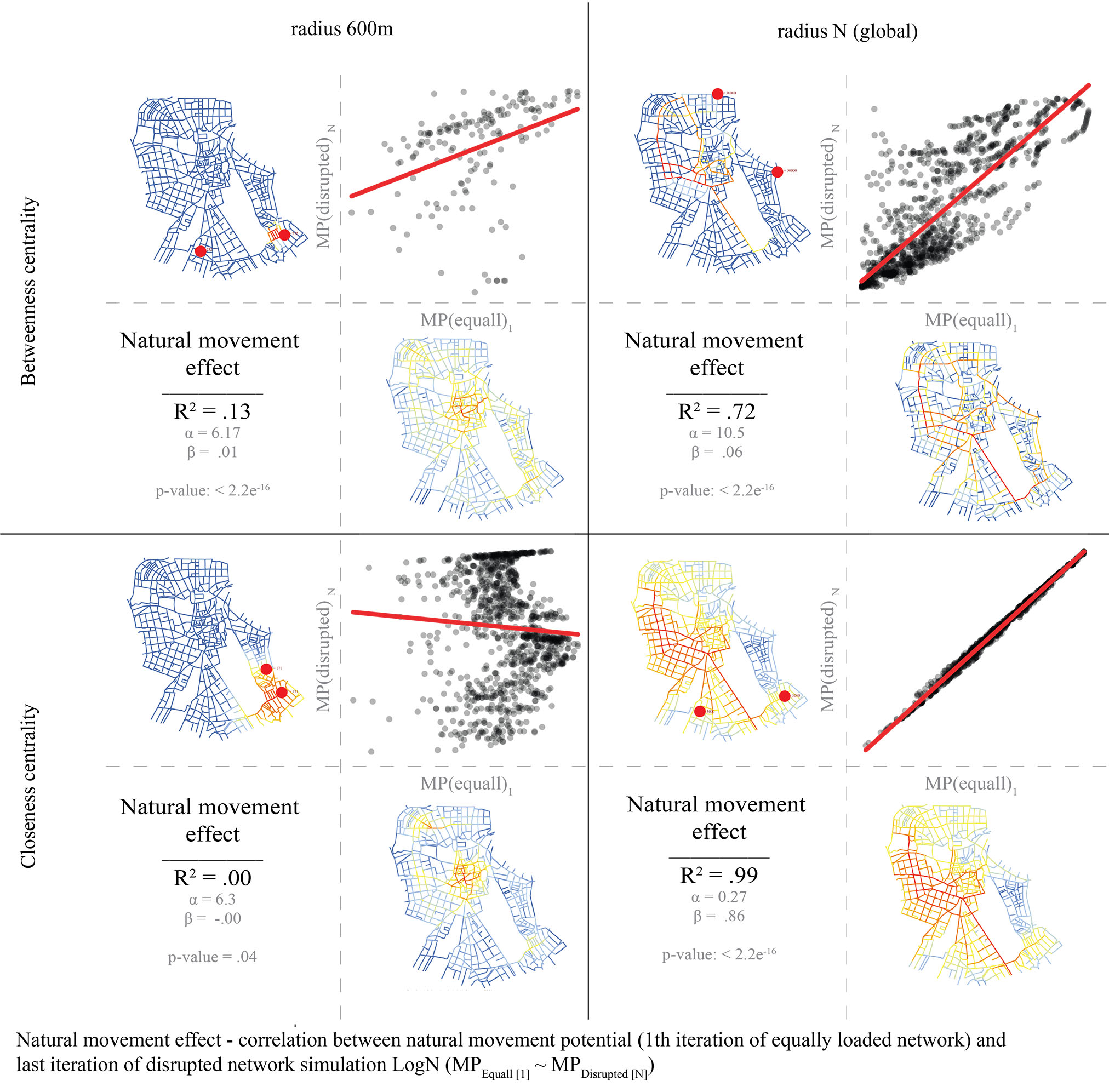 Evaluating the impact of scale, initial network loading, and type of centrality measure on natural movement and multiplier effect. In other words, under which conditions is the influence of configuration on movement predictable without simulations and when the simulation is needed.

NO SIMULATION IS NEEDED: 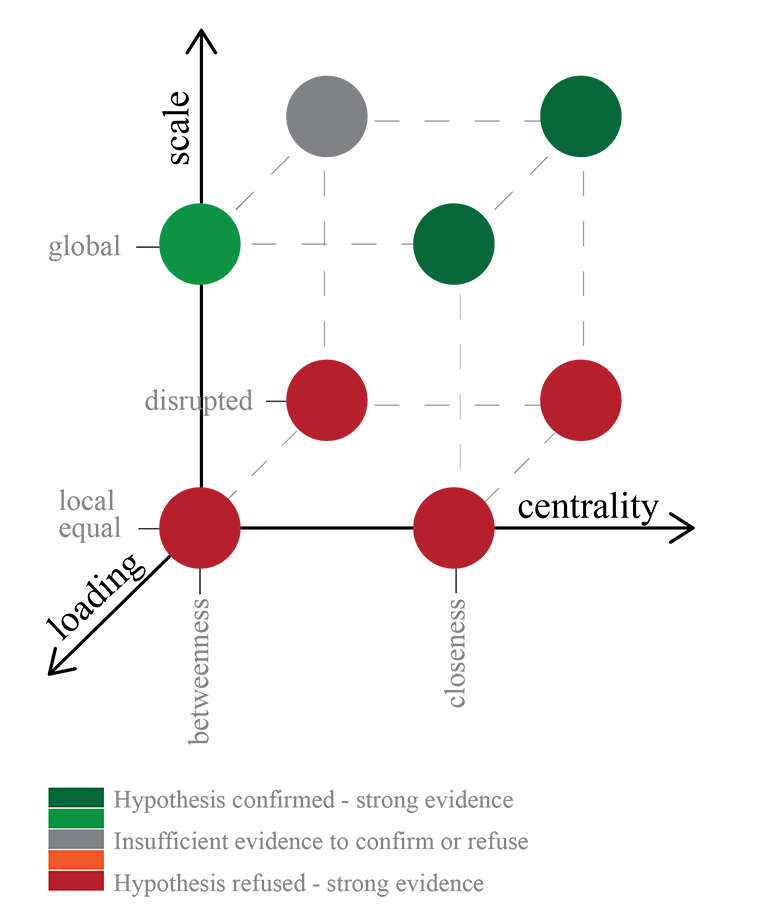 A) Testing the simulation results against empirical longitudinal data

B) Testing the sensitivity of multiplier and natural movement effect on conditions related to street network configuration and type of land use (i.e. does multiplier effect depends on the type of the street network layout and how we model the impact of movement on land use).

Following grasshopper script  simulates the interaction between movement flows and land use distribution through street network configuration. The street network used in the example is simplified example of city of Weimar, Germany which was used as an example in the paper. The data for the street network is directly embedded in this script.

Versions of the script:

2. Full script. This script requires also R language additionally to DeCodingSpaces toolbox and Anemone plugins being installed (see instructions bellow). This version of the script offers some additional visualization and possibility to save the simulation results
evolving configurational properties_full.gh

NOTE: Get sure the GPU acceleration is enabled.
(otherwise is the simulation too slow to execute in real time)
NOTE: Check the requirements section bellow and get sure you get all the plugins installed using the links on this website.(otherwise the version might not fit the version of the script)

After downloading the RequiredGHPlugins_SimAUD19.zip file, check if its unblocked before extracting the zip archive. Right click on the file > Properties > select unblock > select ok 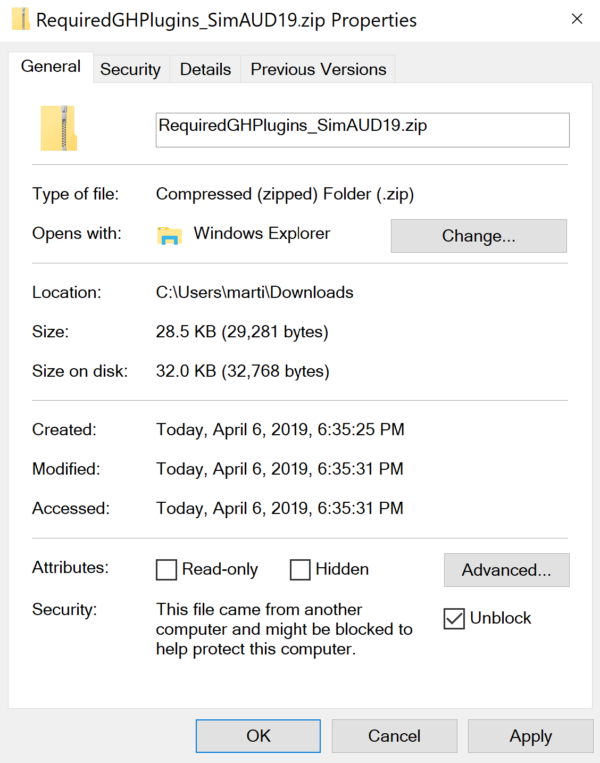 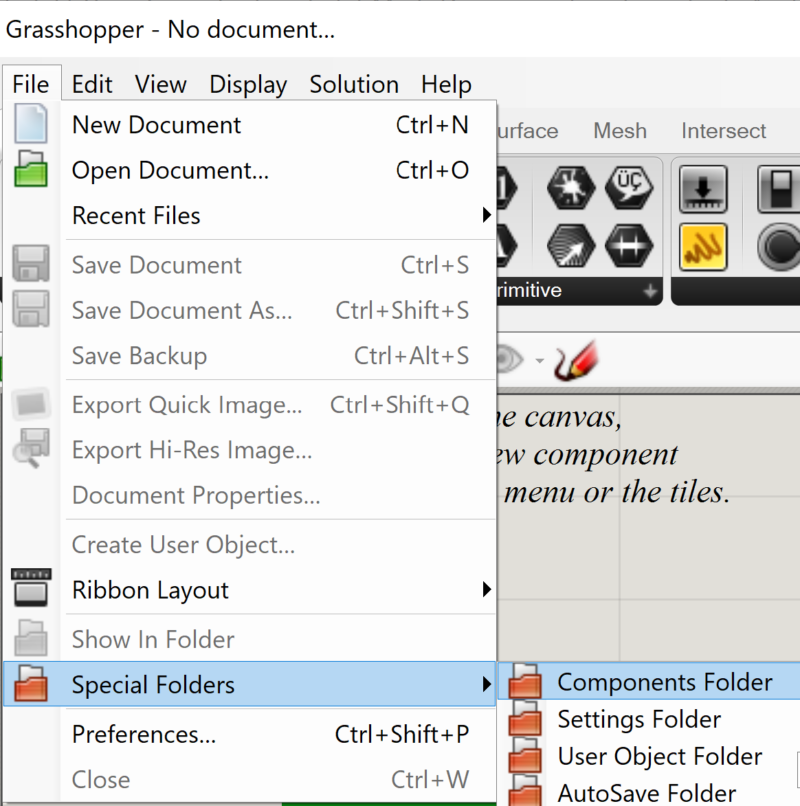 After unlocking and extracting the RequiredGHPlugins_SimAUD19.zip archive, copy the “SimAUD19 user objects” folder into the grasshopper UserObjects folder. The grasshopper component folder can be found at: 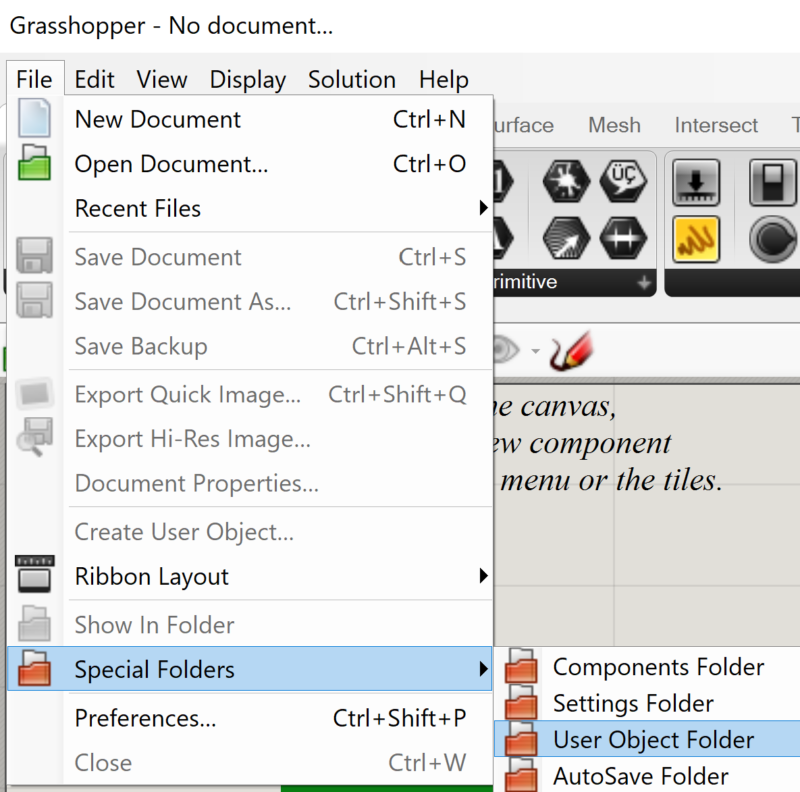